What’s the low-down with Sheerwater FC? 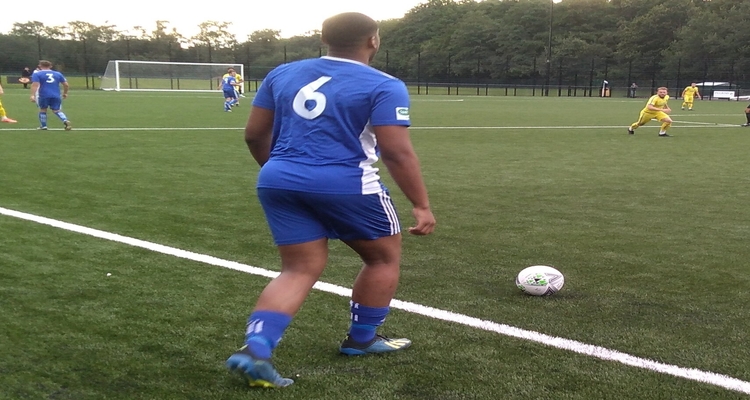 Sheerwater are members of the Cherry Red Records Combined Counties League Premier Division South which sits at Step 5 of the national Non-League Pyramid. They are one of several teams I have visited this season that have moved to brand new stadiums. As a groundhopper, these are always exciting places to visit as a feeling of great pride and enthusiasm exudes from the hard-working volunteers at the clubs involved.

It is nice for me personally to compare and contrast the facilities on and off the field at newly opened grounds. Therefore I had a 120 mile round trip to Surrey. In this case, Sheerwater play at part of the £26 million Eastwood Leisure Centre which is a large council-owned sporting complex situated within the grounds of Bishop David Brown School.

The club had previously operated for 50 years at a dilapidated athletics stadium that didn’t meet modern Non-League ground grading requirements for senior football as the pitch was only 100 yards long and there were problems with installing floodlights. However, ‘The Sheers’ had to move out three years ago as the venue is being replaced amidst a major local regeneration scheme on the Sheerwater Estate with 1,140 new homes being built alongside vastly improved leisure amenities. So after groundsharing at nearby Woking FC, the good news is that Sheerwater have now been able to return home to a stadium of their own. This has secured the club’s future following a period of uncertainty.

There is a 3G artificial playing surface and Sheerwater have a pay-as-you-go monthly agreement encompassing matchday hire and twice weekly training sessions. For spectators, there is a decent covered enclosure that runs the full length of one touchline. This is mainly for standing patrons but there are 100 seats in the middle section. Just outside the ground is a smart two-storey building that houses dressing rooms on the lower floor and a well-appointed clubhouse bar upstairs with windows looking out on to the playing area. Sheerwater FC run the clubhouse and can thereby host social events that greatly help with club finances. The 3G pitch is also used by schools, community and youth teams so it is a valuable hub for the local area.

Priced at £1.50p and entitled ‘Up The Sheers’. A nice mix of colour photos, editorial notes, club history/honours, fixtures, stats and match reports.

The visitors from Chertsey Town were always in control and their goals came from Tony Halsey (31 minutes), Casey Maclaren (44 mins) and Jake Baxter (65 mins). Sheerwater’s marksman was Leon Dadey (59 mins).