Why Does Everyone Hate Novak Djokovic?

He might have 20 Grand Slam titles to his name, and be on the cusp of a calendar Grand Slam going into the semi-finals of the US Open tonight. However, for some reason, Djokovic just can’t catch a break with tennis crowds outside of his native Serbia.

So why haven’t tennis fans taken to Djokovic?

Below, we’ve taken a look at some of the reasons why everyone seems to hate a guy who is potentially one of the best athletes to have ever picked up the racket… 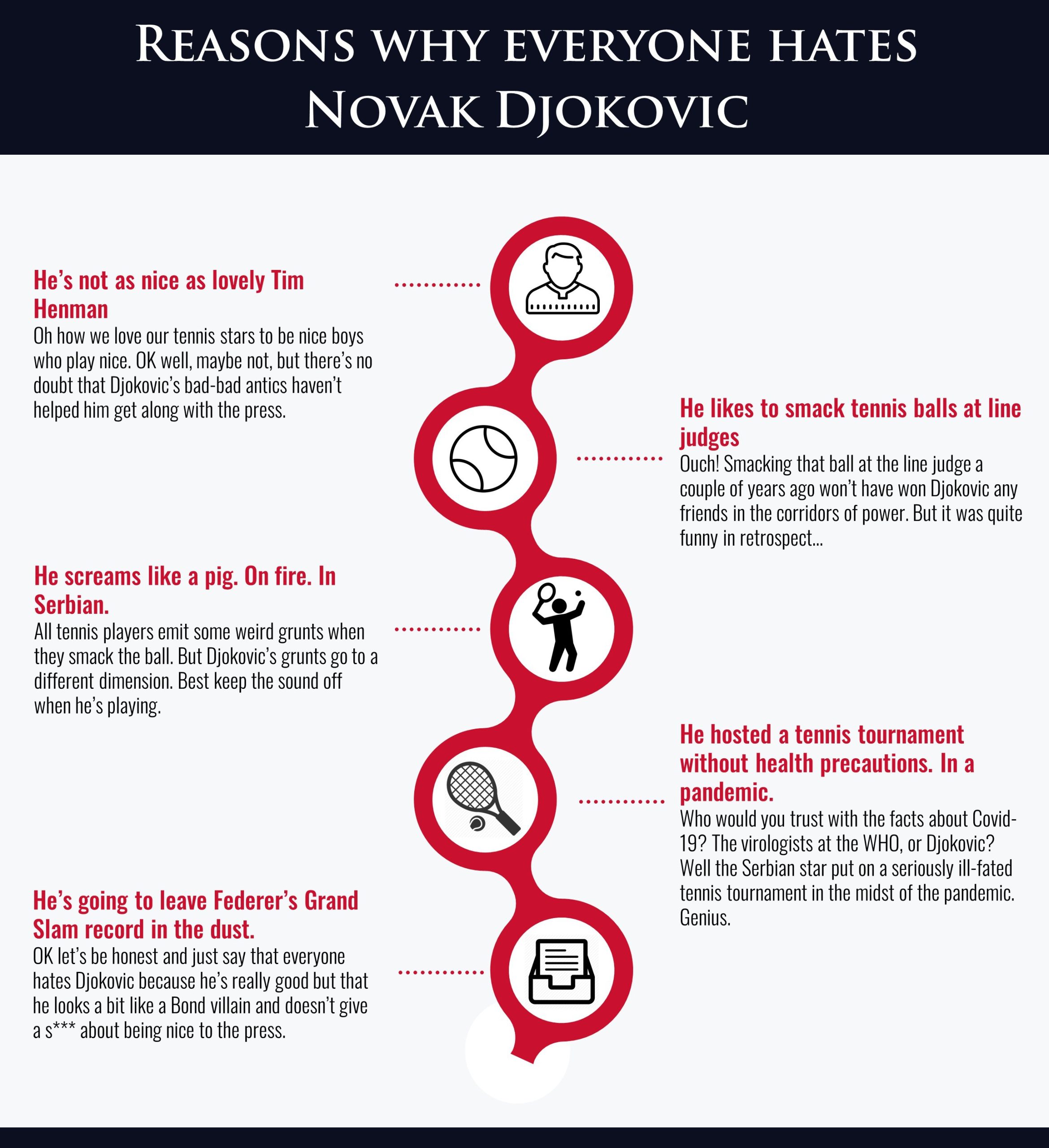 1. He’s Not As Lovely as Tim Henman

Let’s face it, if Andy Murray wasn’t British, UK tennis fans would never have taken to the Scotsman for the simple fact he wasn’t as happy, polite, and lovely as Tim Henman. Well, Djokovic has befallen the exact same fate in the tennis world, only with the added issue that he only has a small home fanbase in Serbia to fall back upon. How did John McEnroe get away with it you ask? He at least brought an entertaining and cartoonish quality to the art of being a total w*nker on the court - Djokovic is just grim and angry.

2. He likes to smack tennis balls at line judges

It might be an entertaining YouTube clip in retrospect, but Djokovic did himself no favours with the fans when he smacked that poor judge with a ball! Of course, he claims it was an accident, but does everyone really believe him?

3. He screams like a pig. On fire. In Serbian

OK, so grunts and screams are nothing new in the world of tennis - and we can 100% accept that. That being said, there’s a different, slightly more intimidating edge to Djokovic’s piggish grunts. Is it the raw tone of his grunts that puts everyone off, or just that Serbian can sound like a scary and intimidating language to the strawberries-and-cream brigade who tend to make up the largest part of your average tennis crowd? Who knows - either way, he’s definitely a sound-off kinda player!

4. He hosted a tennis tournament without health precautions. In a pandemic.

Granted, some people might very well praise him for this. However, if those people were in the right, then everyone who got their first vaccine at the start of the year would all be doing Bill Gates’ bidding by now. Mid-pandemic tennis tournaments without safety measures - not the greatest idea in the world!

Let’s be honest, the real reason everyone doesn’t like him is that he’s going to leave their beloved Roger Federer’s Grand Slam record in the dust. He’s like the nasty Bond Villian who’s going to beat the good guy and we just can’t take it! But at the end of the day, we need a pantomime villain who doesn’t care what the press thinks of him. He feeds of the hate of a crowd, which in turn just annoys them even more.

Come to think of it, Djokovic is in fact a maverick of the tennis world who has taken on the establishment and absolutely smashed it.

So do you know what? We’re beginning to quite like the guy actually!